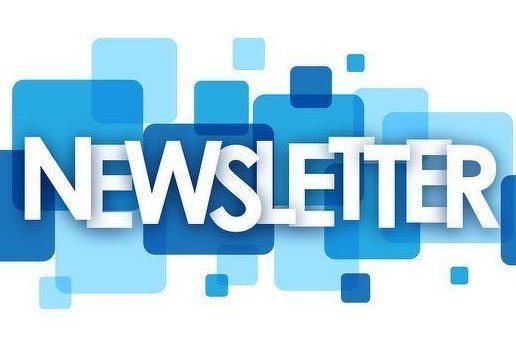 December has been a great month of activity for the Canucks! We had several practices, and several games and the team is really progressing on the ice. Each child has contributed and already scored a few goals, which just shows how much the 4-on-4 game is working for these kids! They are each involved in every game and showing more and more confidence each and every time out. The Canucks also participated in a couple of team activities, having a session at the Hockey Lab which really helped work on their shot, and a volunteer activity at the Tyndale St-Georges community center, where the kids helped make lots of dough that will eventually be baked in to cookies for the kids attending the after school program. It was a terrific month and the kids are off on the winter break, ready for what awaits the team in the 2nd half of the year! 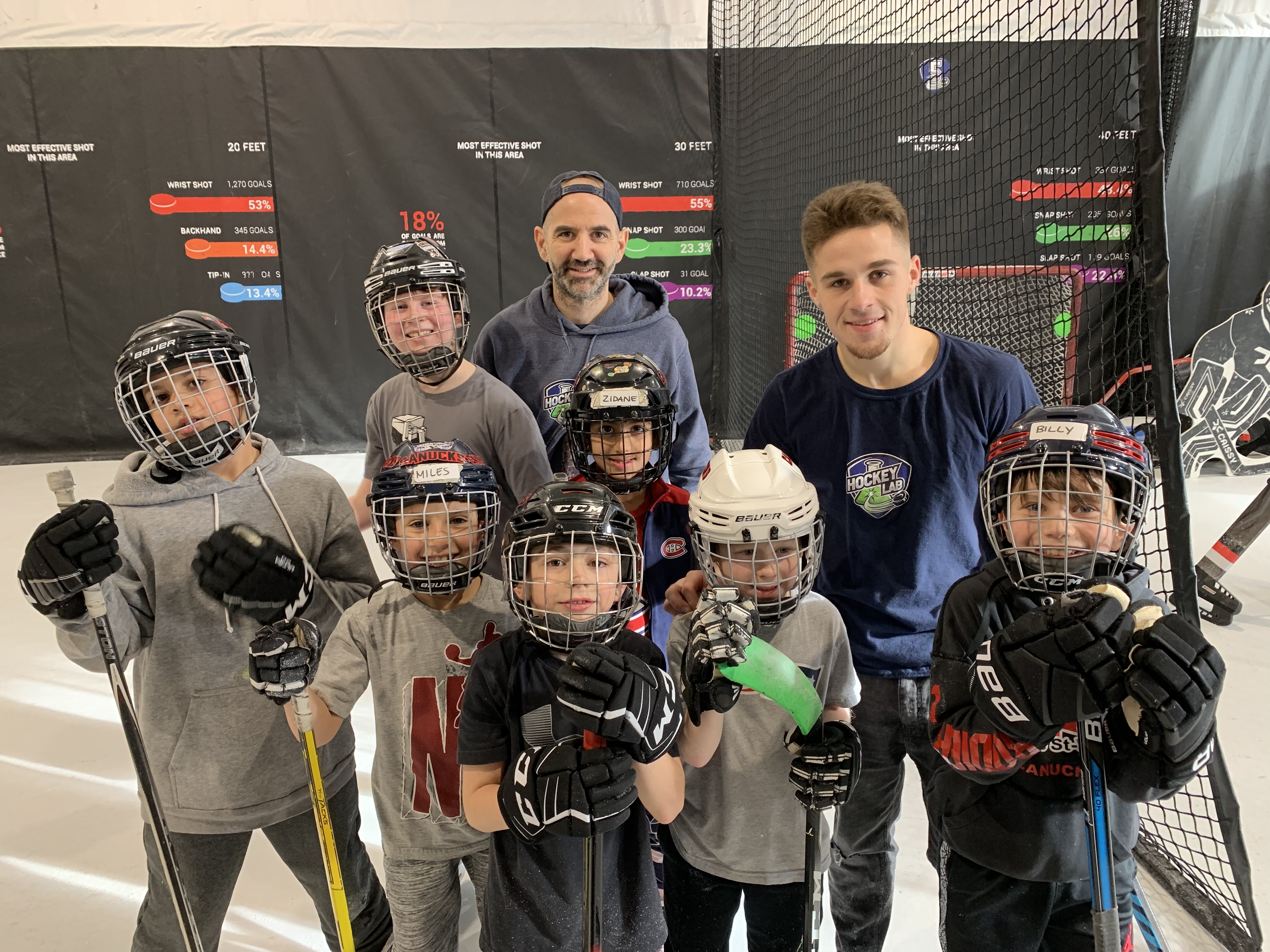 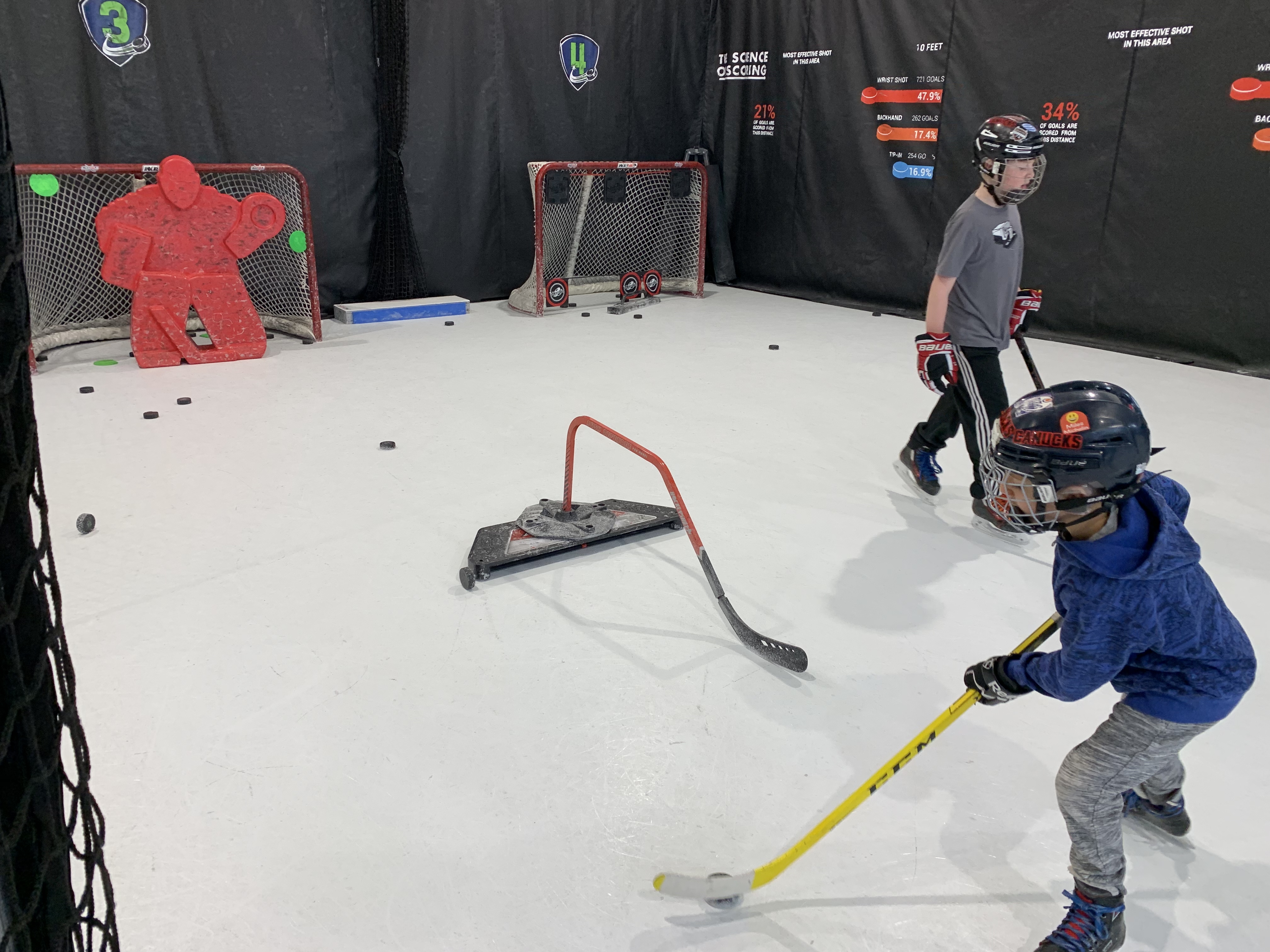 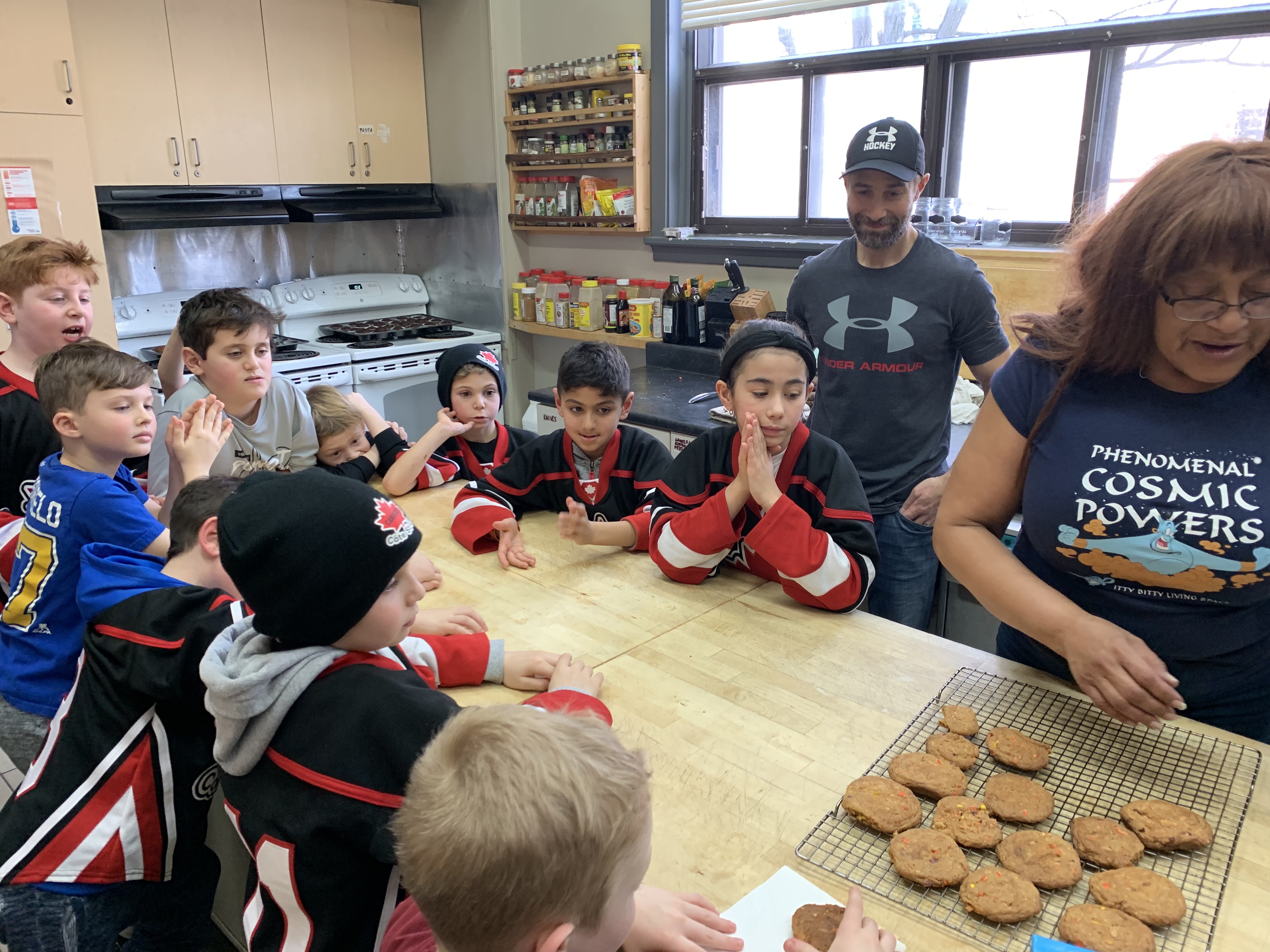 The Novice 4 Capitals have had an awesome first half of the season!  We celebrated with a team holiday party with food and games and a chance for the kids to get to know each other better.

Some of the highlights have been the opportunity for the kids to try playing goalie, a position most have found exciting and fun. The kids are working hard, learning to pass the puck to one another, encouraging each other and most importantly, having fun with an eagerness to play and learn the game.

We look for to continued hockey in 2020! 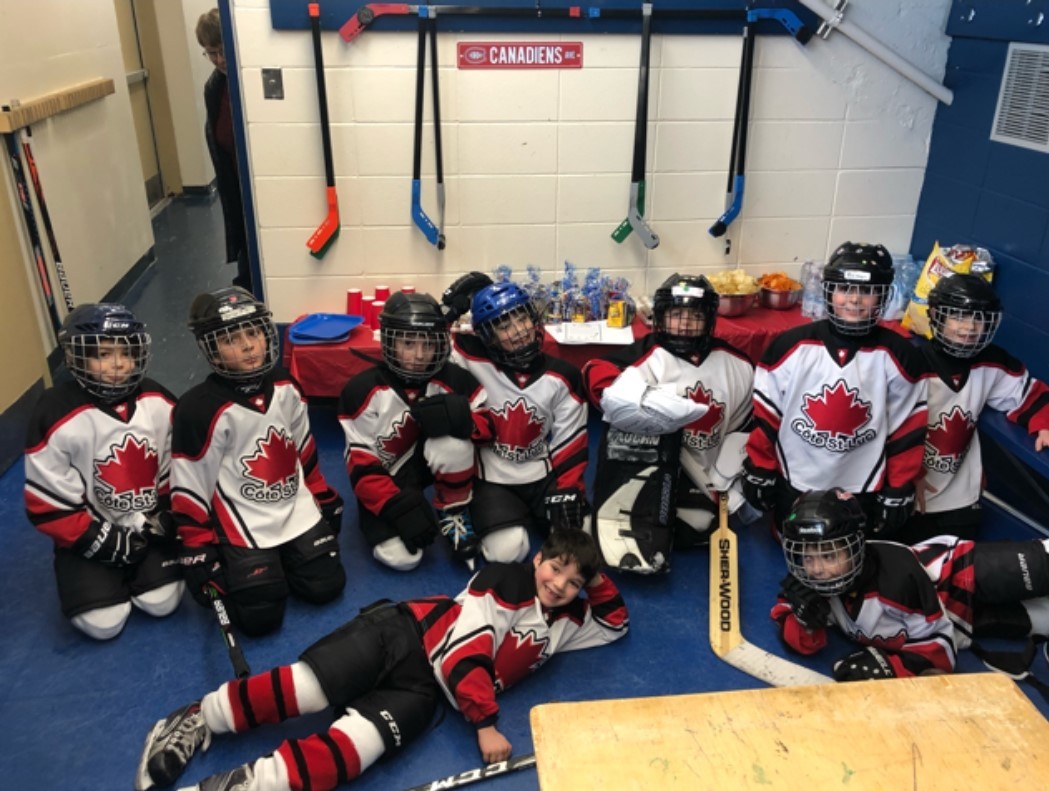 The Atom A Canucks participated in the Ottawa Atom tournament on December 6 and 7 at the Sensplex!

It was a great opportunity for the players and parents to bond together, and an awesome time was had by all! The Canucks ended the tournament with one win, one tie and one loss…and missed advancing to the playoff round by 1 point. More importantly, the win against Nepean Team E was the team’s first win of the season! The players were overjoyed with the win, which occurred on Olympic-size ice!

Coach Allon Pollak had promised the players that if they ended with a “W”, they would get to push him in the pool at the hotel and he stayed true to his word! On Saturday afternoon after the “W”, back at the Sheraton, the players pushed Coach Allon into the pool with all their might!

In addition to the three tournament games, the players had lots of fun during their downtime. After celebrating Shabbat in the hotel lobby with the Arzouan family, they spent Friday night watching the Ottawa 67s play against Les Olympiques de Gatineau, and they got to sit on the players’ bench during the warm-up. Lots of hotdogs, poutine, and popcorn was had by all (including some of the moms and dads!). The rest of the time was made up of a lot of silliness and fooling around at the pool and playing sticks in various hotel rooms throughout the day and night. Some of the families topped off the weekend with a classic brunch on Sunday morning at Elgin Street Diner!

In all, it was a great experience for everyone who participated! Now the Canucks are looking forward to continuing their winning way in 2020!

Shabbat at the Sheraton 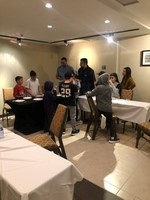 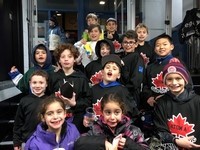 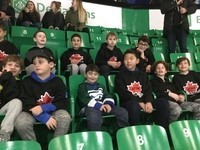 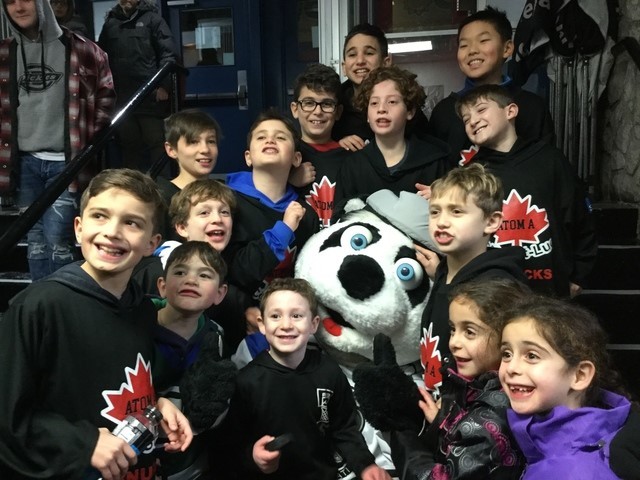 Hanging out at the pool 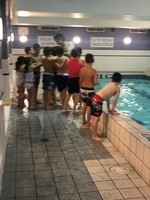 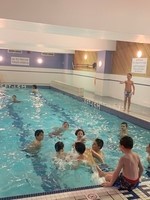 Hockey Moms will always be moms even when away at a tournament! 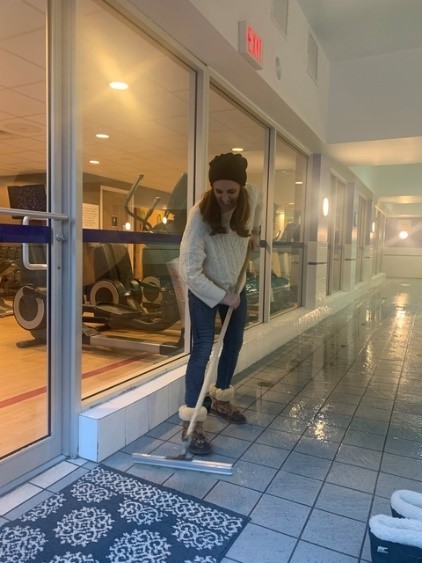 On the Olympic-size ice! 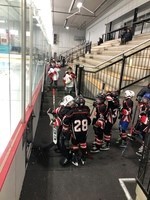 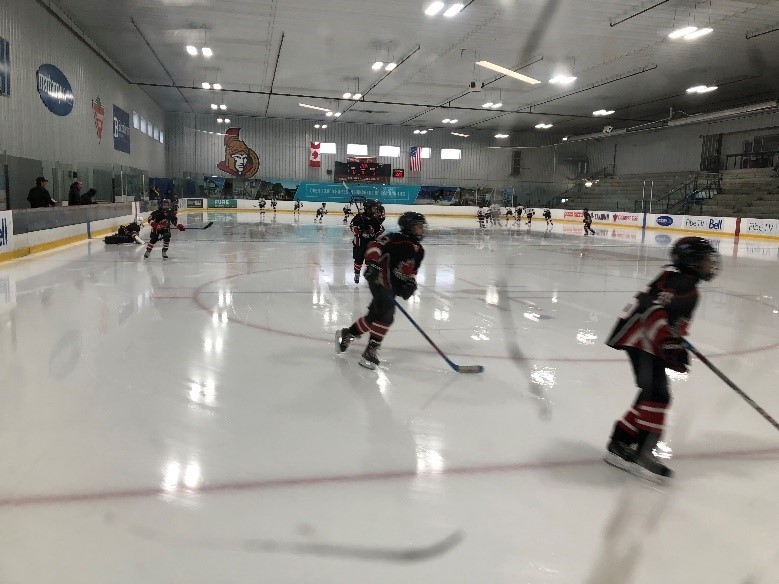 Hanging out at the Sensplex after Game 3 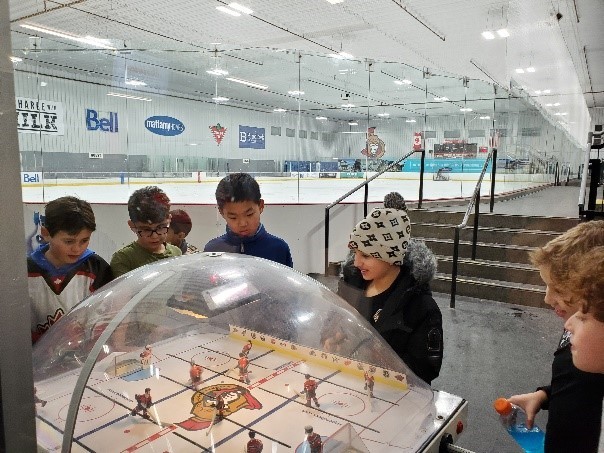 After a very busy November playing eight games in the month, December has been a little quieter. With three games this month, the Atom B team has managed to go 2-1 for December. We started the month playing the Westmont Wings. It was a very tight back and forth game with our team scoring the winning goal with just 0.4 seconds left on the clock. That just goes to show that you never give up!

The next game was a tough one: We were up against one of the top teams who had a 6-0 record and a had only let in one goal in six games, scoring a total of 37 goals. We knew it would be a hard game and it was made even tougher as we were missing two forwards and a defenseman. The boys hit the ice and played hard. After the first period we were down 1-0. After the second 2-0. Our game got even harder as one more defensemen got hurt and was out of the game, and then a forward had to miss a couple of shifts due to a minor injury. In the end, we lost 4-0 but, for us, that was a victory. The boys played hard through diversity, and the coaches were very proud of what they were able to do.
Our last game in the month was against our cross-town rivals (they are not really rivals but it sounded good). The game ended with a score of 2-0 and the Canadiens first shut out win. It was a close battle with our team playing well as a team and implementing strong breakouts that we had worked out in practices that week. This game was also featured in the pages of The Suburban newspaper.

During the month we managed to get in three practices. The coaches worked on many different fundamentals including positioning, passing, shooting, and breakouts with the kids. We really noticed the difference in the players when they had practices and were then able to implement what we are teaching in the games. The kids that have attended all the practice have definitely furthered their skills and are better hockey players.
We continued our player of the game ritual giving the winner the funny helmet to wear. The kids enjoy the experience.
The team would also like to thank Carl Leveille from Scotia Bank at Ferrier and Decarie for sponsoring the team this year. His sponsorship will help the team try and get more ice time and additional training.

This month the CSL Atom B Canadiens are also trying to give back to the community. We are fortunate that our kids are able to play hockey and have parents that are able to bring them out to all the games and practices. We are even able to have a post-game snack/treat for the kids. Our kids are fortunate as are their families. With that in mind, we invited the parents and the players to help us. As a team, we wanted to contribute to a worthy cause and help those in our community that are in the most need. We are asking that players and spectators of the games bring items including food and clothing to the games or practices. The Coaches brought in a big hockey bag to fill up. Before the holiday break, the team will donate these items to the Old Brewery Mission. It's a great way to remind our children how blessed they are at this time of the year and to give back to our community too.

The Atom B Canadiens would like to keep giving back to the community and would like to challenge other teams to either team up with them or have them give back to the community as well. Together, all the CSLMHA teams can make a difference, not only at the holidays but throughout the year. The acts of kindness will help them develop into amazing kids. 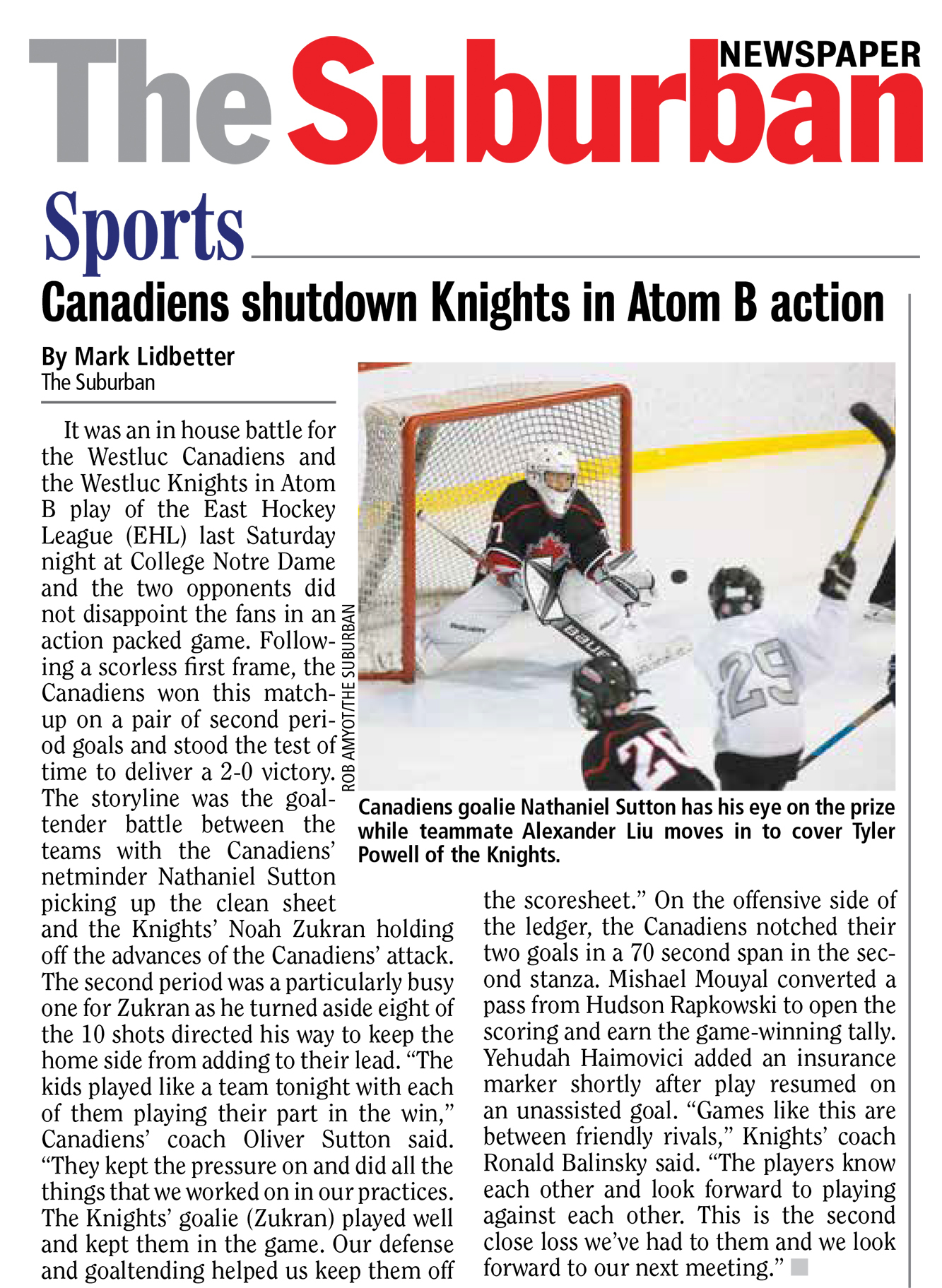 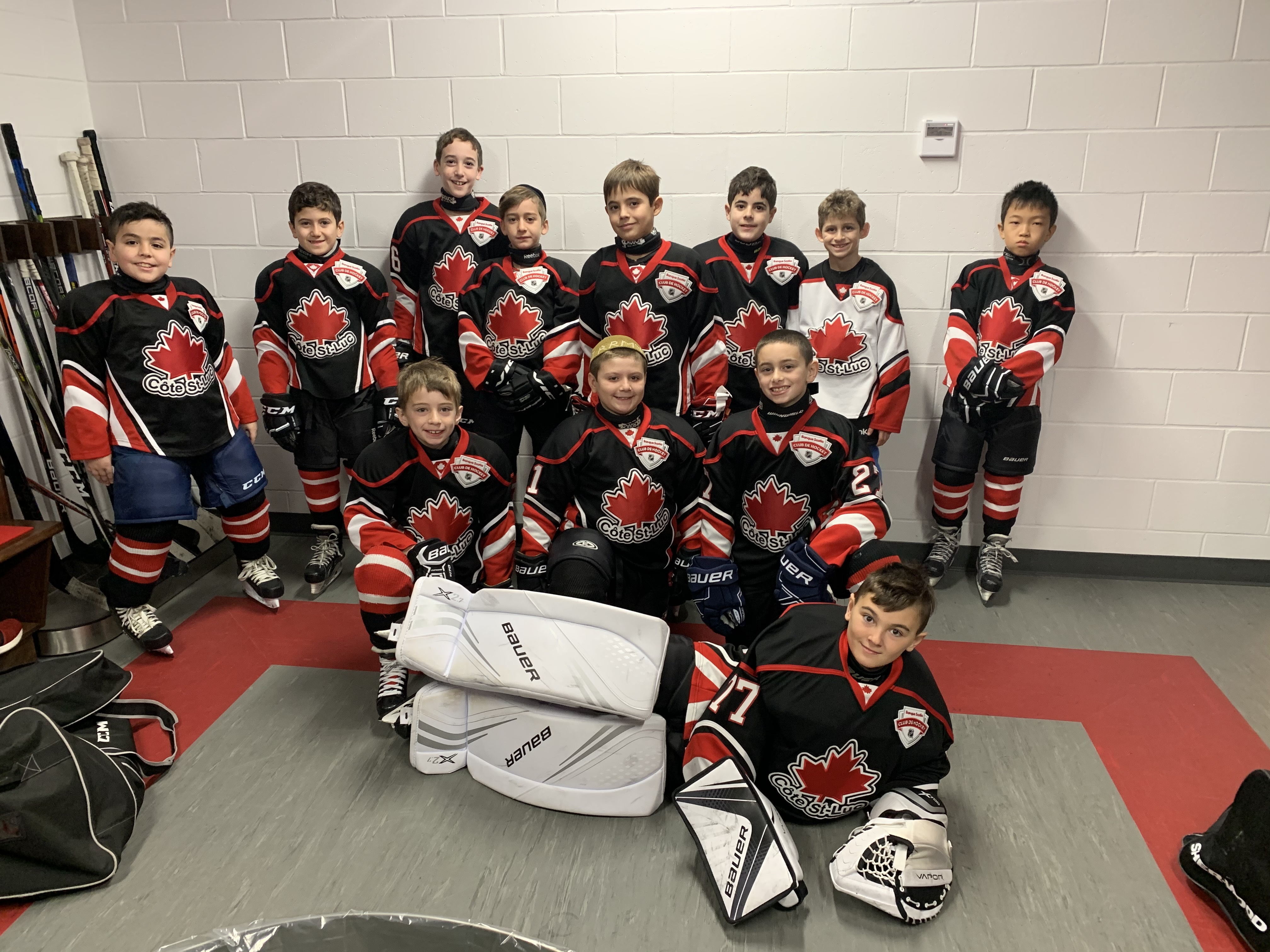 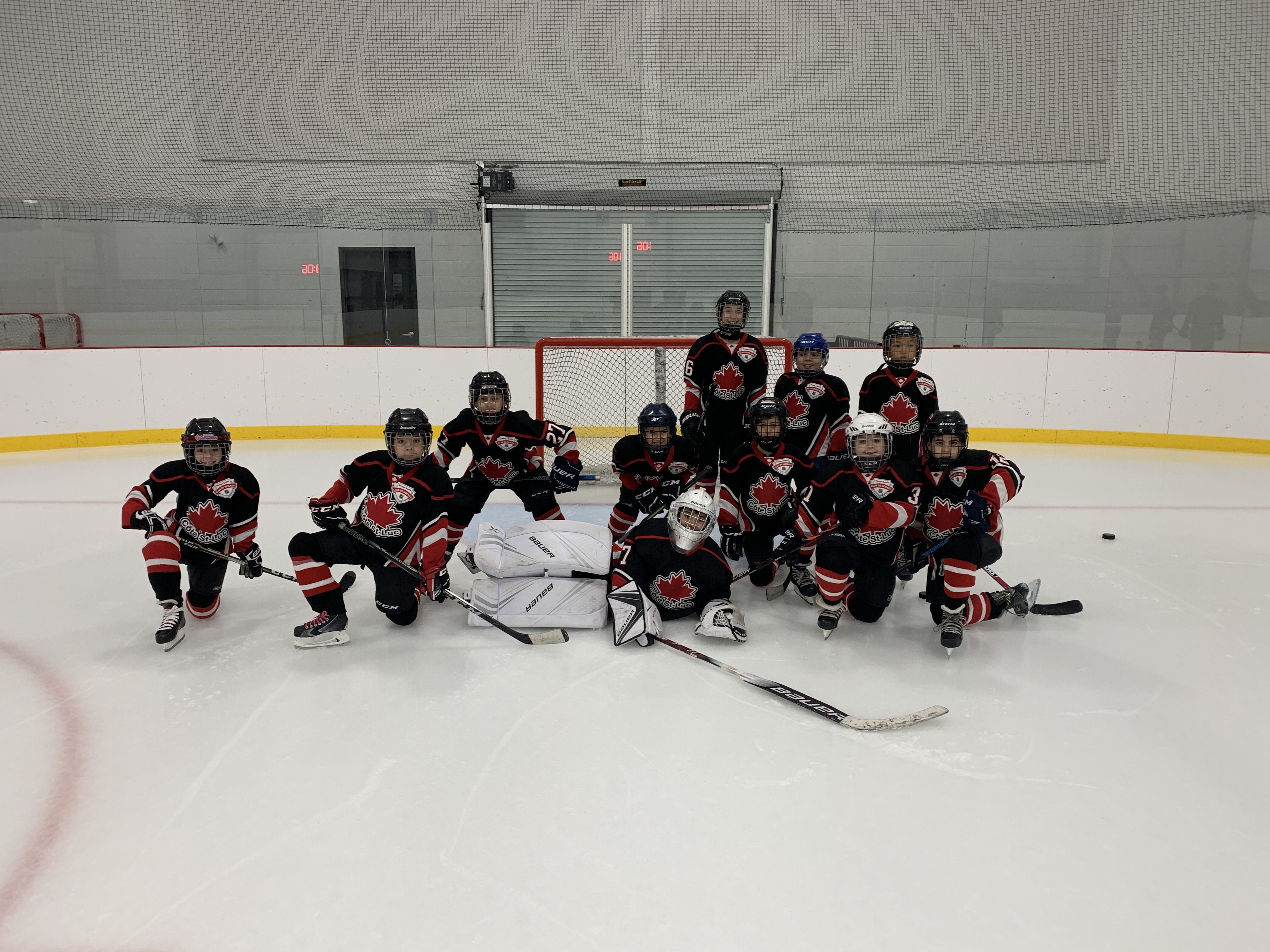 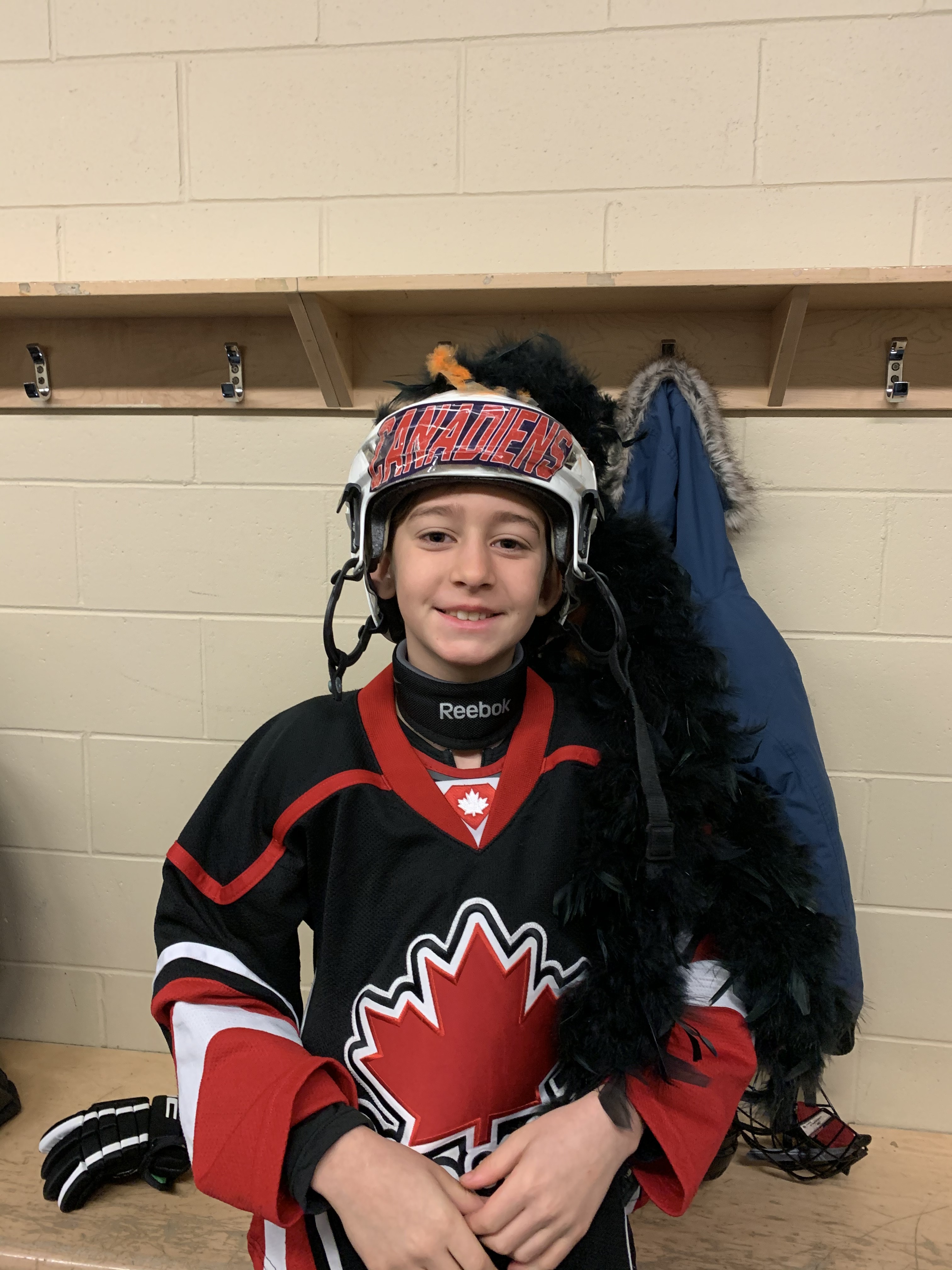 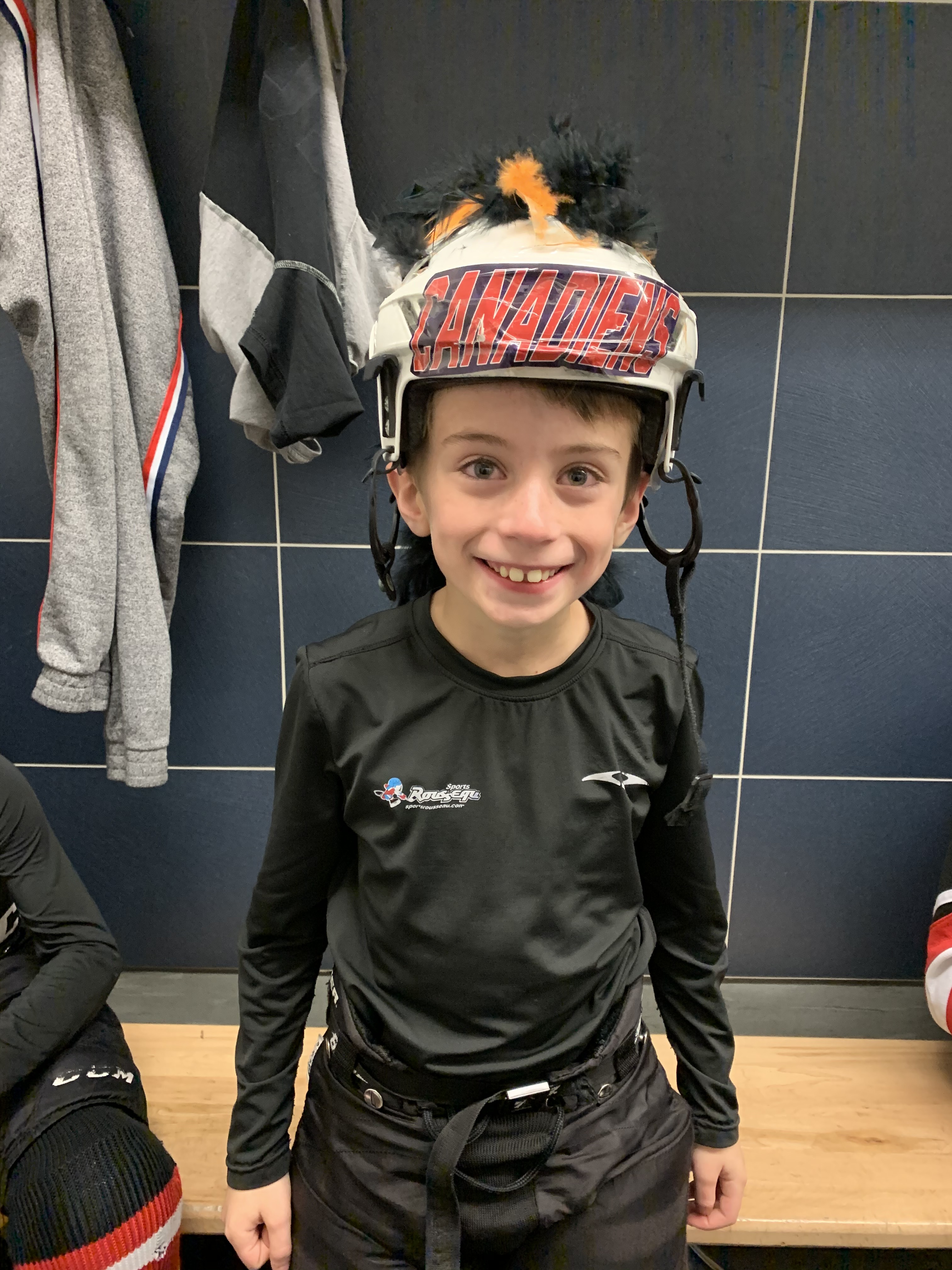 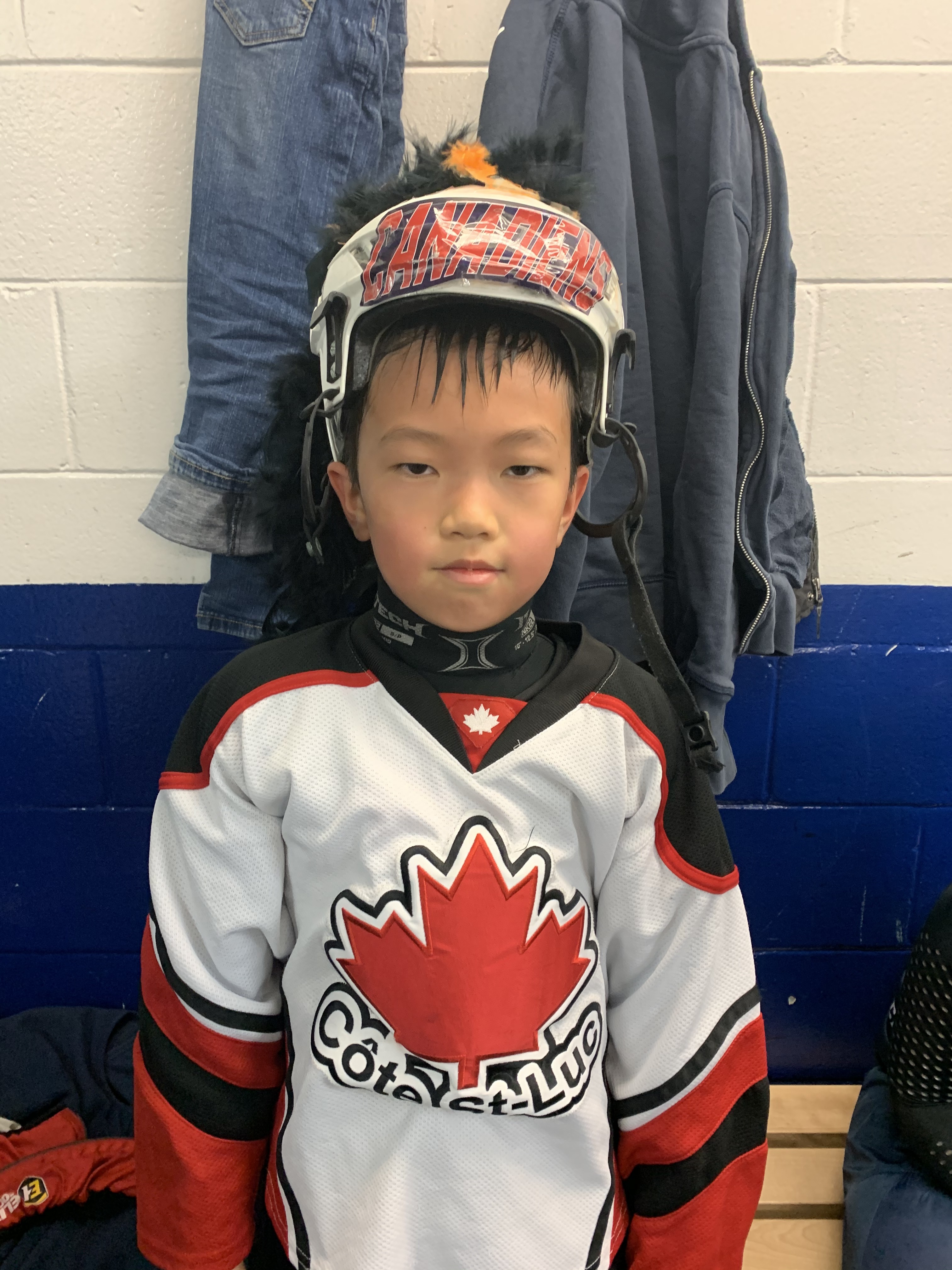 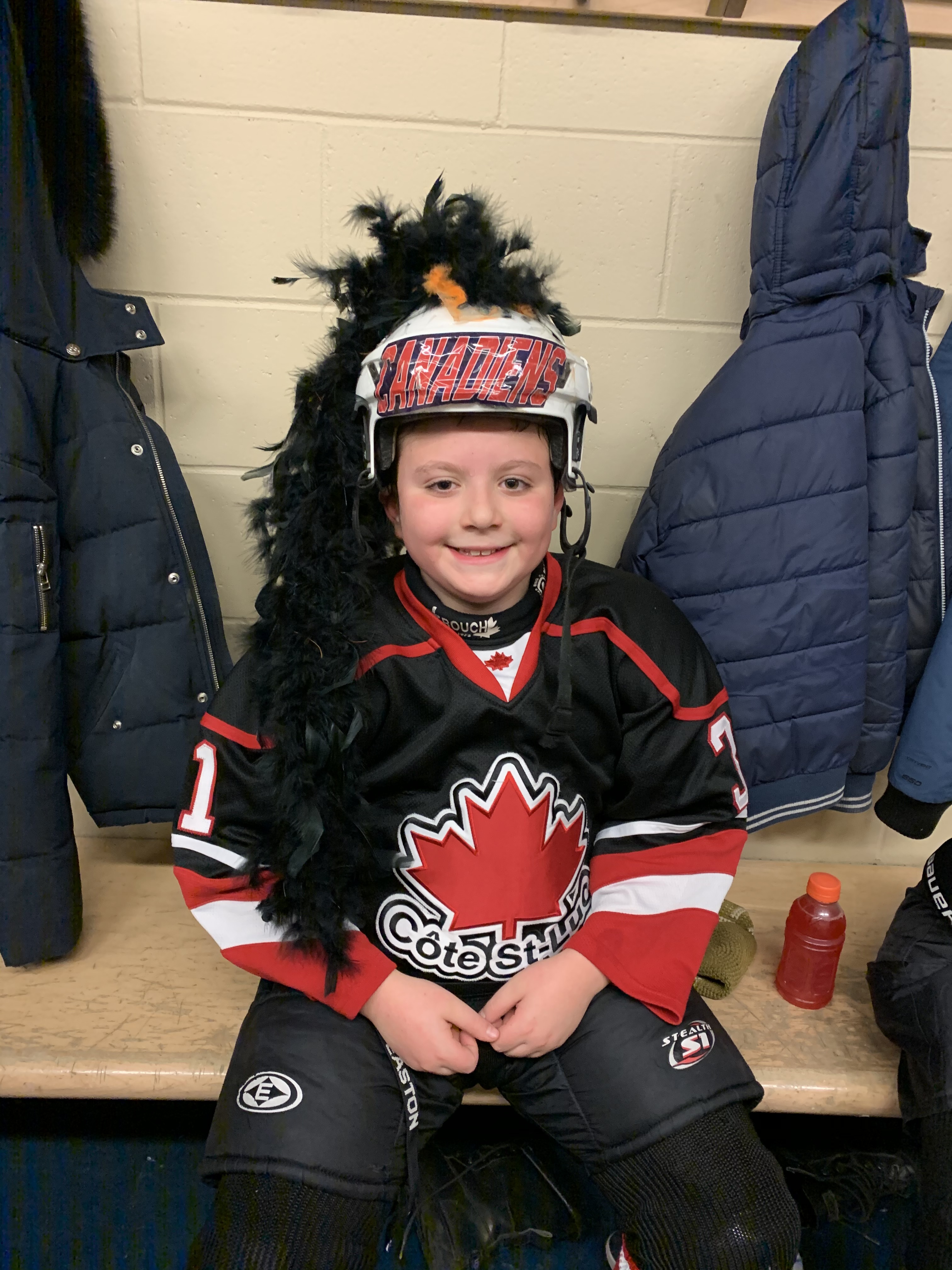 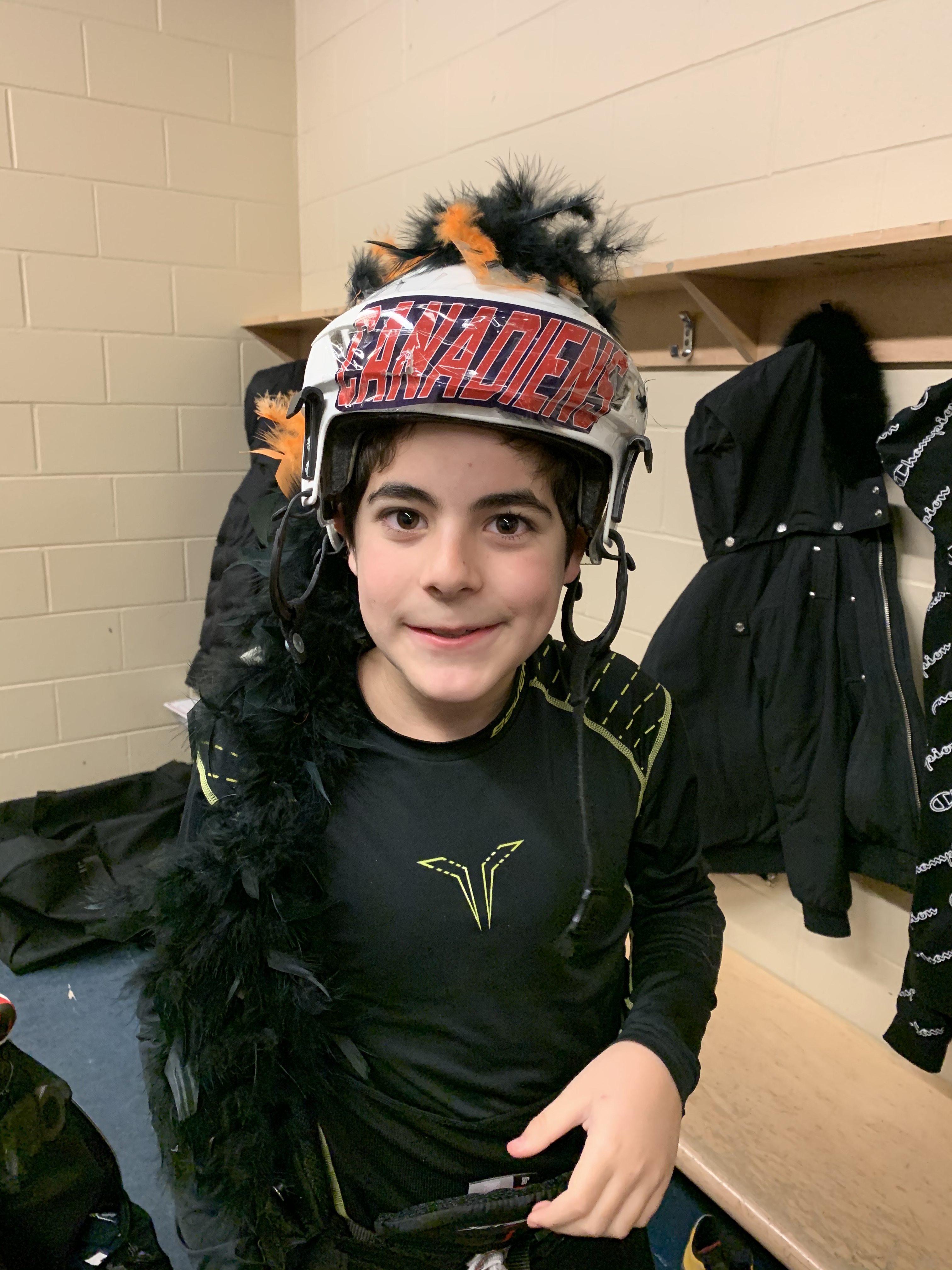 The PWBB Kings finished off the first half of their season with a 7-4-0 record and a 2-game win streak. They currently sit in 5th place with the 4th best goals for, and the 3rd best goals against. With just a few practices left before the holiday break, the Kings will see their first game action of 2020 in early January when they start off the TOM tournament on the 7th against the St. Leonard Bulldogs.

The players and staff want to wish all the players, coaches, and administration in the Kings organization a very happy holidays, and good luck to all in 2020. 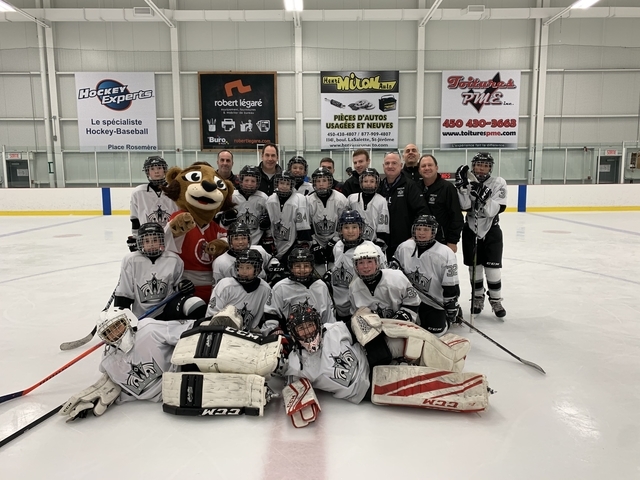 The Bantam BB Kings were very busy travelling in December playing 7 of their 8 games on the road.  This included 4 games in the Canada Cup Tournament held in Chambly, where the team missed the finals by only 1 goal, and ended up winning the consolation final by a score of 7-0!

We ended 2019 with a fun family scrimmage, where the players faced-off against parents, coaches and siblings.  The players won that game 16-11 and celebrated their victory with a pizza party to cap the year off.

The development programan and team bonding activities have been great for this group and it has elevated their play.  With only 6 more regular season games left and 1 tournament in February, the focus will shift on training to get the team ready for the playoffs.

Happy New Year to all! 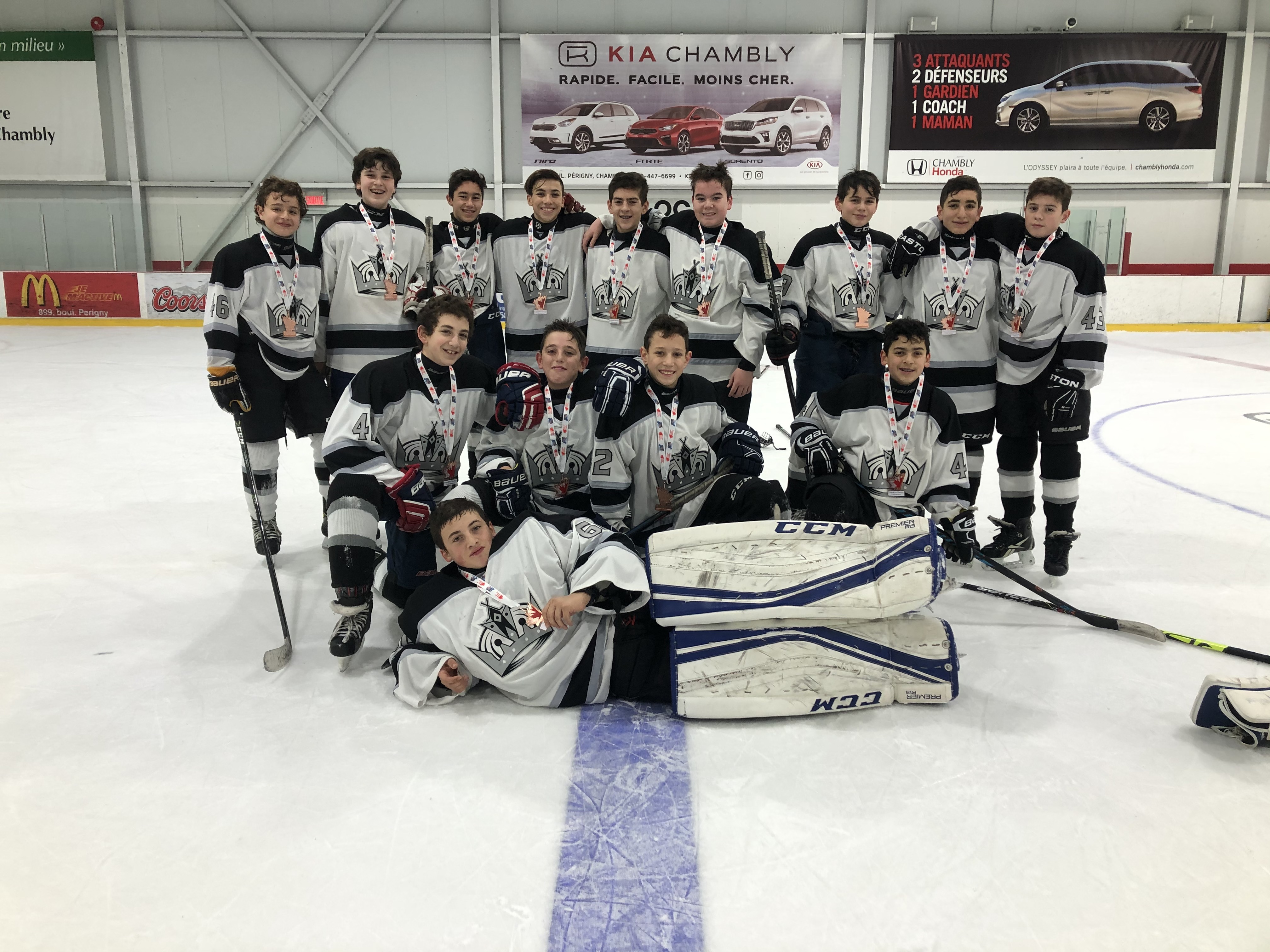 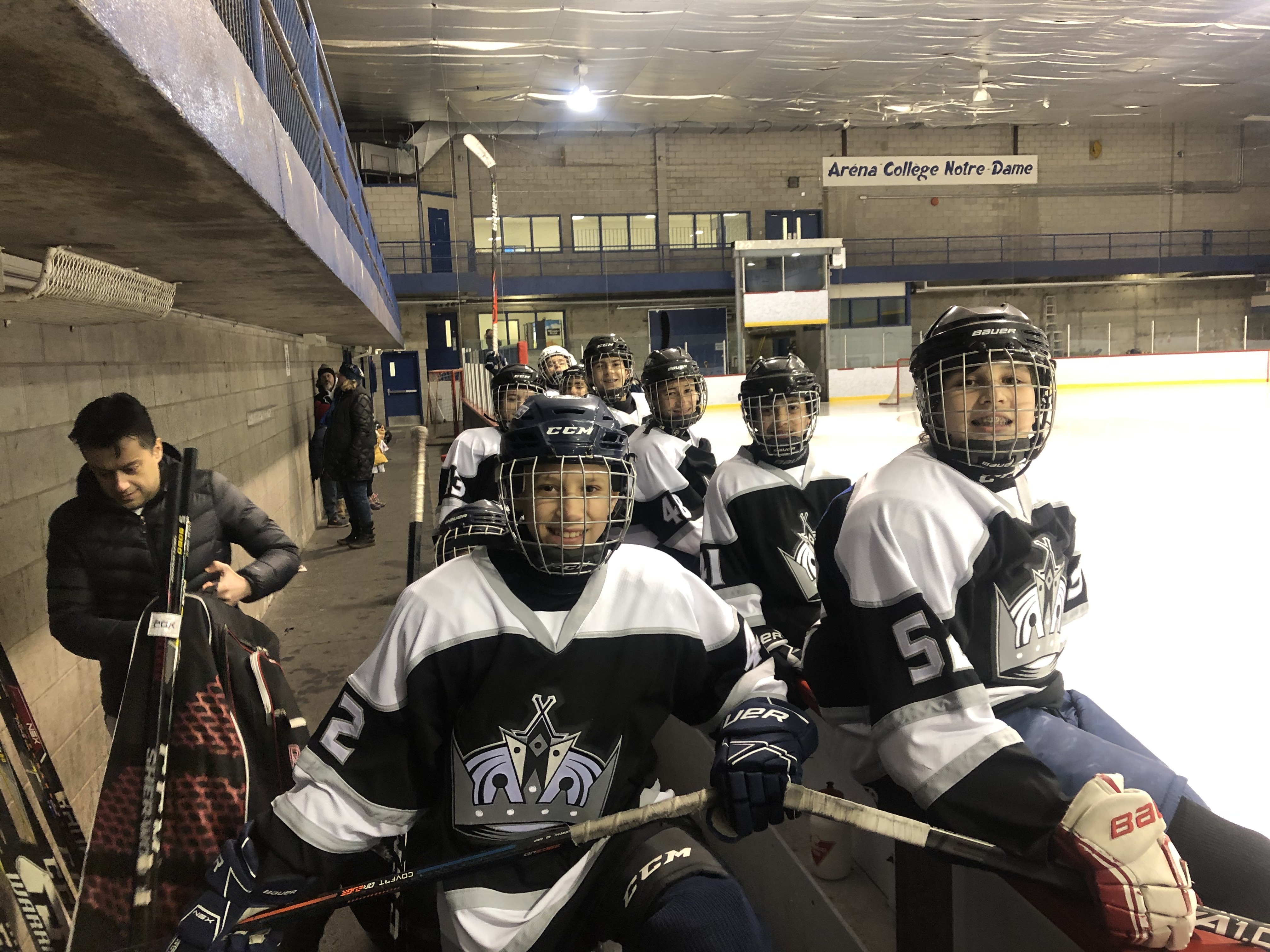 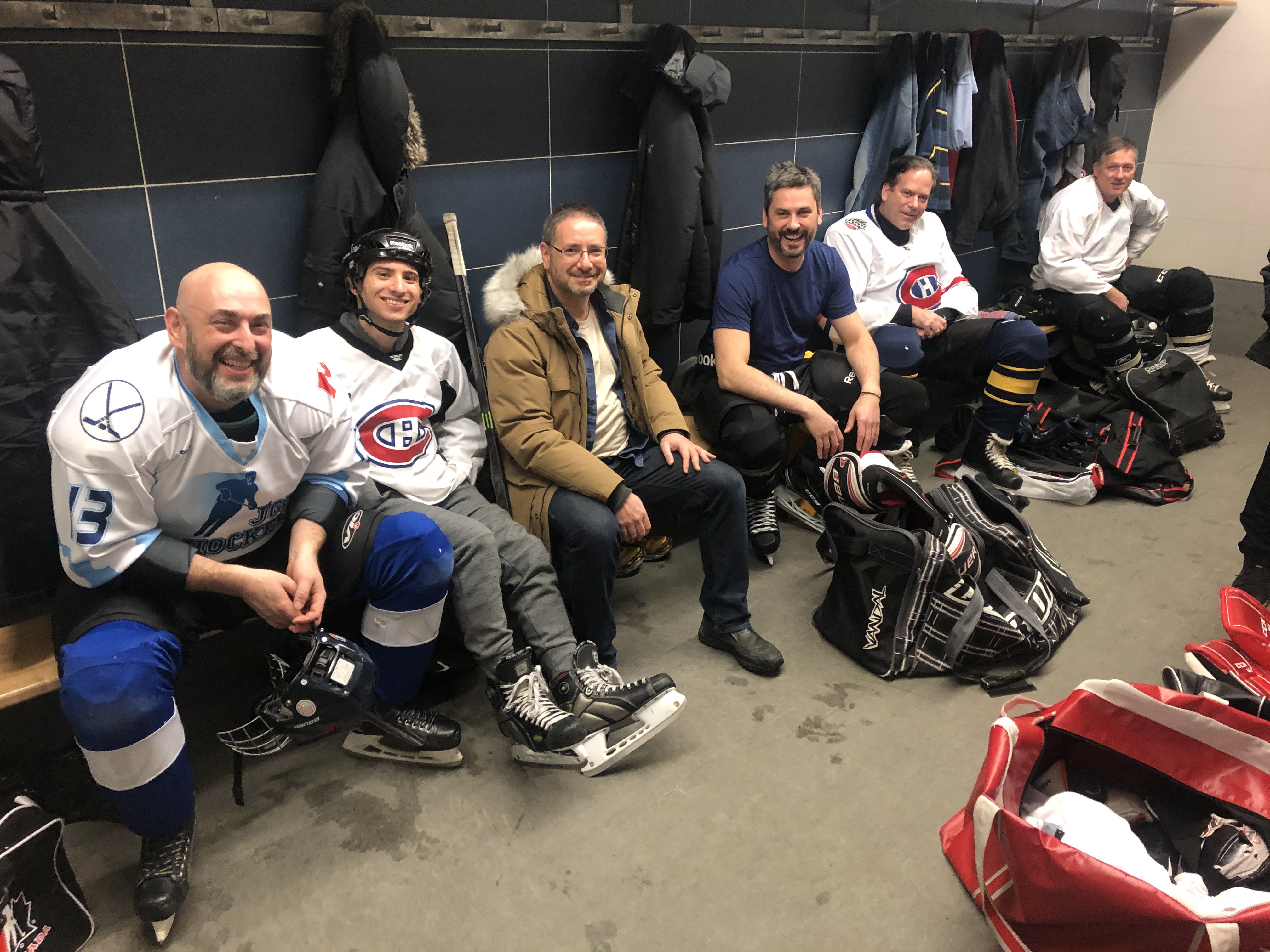 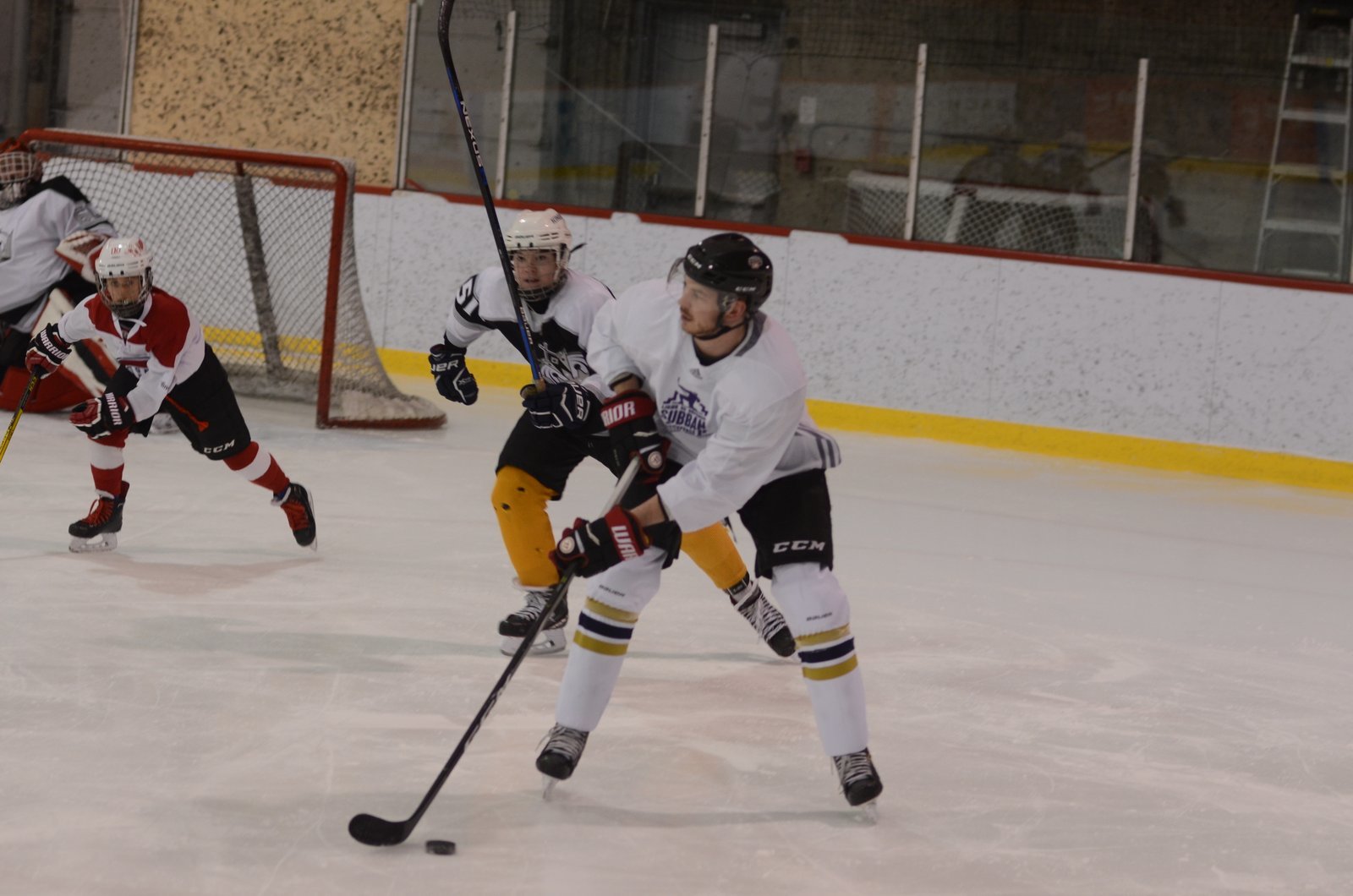